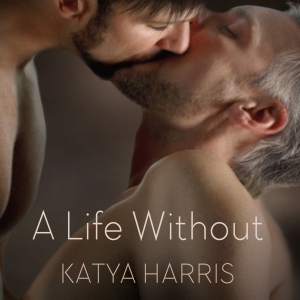 After decades of wondering and worrying over his submissive tendencies, fortysomething Todd decides to explore his fantasies. His first step is to join a BDSM club, and it’s there that he meets Malik, a young and beautiful Dominant who is very interested in introducing Todd to this world. In fact, Malik is interested in everything about Todd, which is startling to the older man given the differences in their ages. Malik helps Todd explore his submissiveness, but after an unpleasant meeting with Todd’s ex-boyfriend, he also encourages him to confront his demons so he will no longer live his life in shame.

“A Life Without” is part of Dreamspinner Press’ “Never Too Late” Daily Dose package which is available here.

One thought on “Novellas”

This site is for 18s and over.

My Tweets
© Katya Harris and misskatyaharris.wordpress.com, 2015. I hereby assert my rights as the author/creator of the original material posted on this site. Unauthorized use and/or duplication of this material without express and written permission from this site’s author and/or owner is strictly prohibited. Excerpts and links may be used, provided that full and clear credit is given to Katya Harris and misskatyaharris.wordpress.com with appropriate and specific direction to the original content.
Loading Comments...
%d bloggers like this: